In the past, we’ve looked into how the star ratings of online reviews are not the only factor that people see when researching products or services to purchase. Eliciting quality written reviews can be a challenge for any small business. But when you’ve cultivated a hyper-loyal and engaged community, online reviews can be a boon to your marketing strategy.

One metric that’s becoming increasingly important to marketers is community engagement. These engagement metrics tend to focus on social media channels like Twitter, Facebook, and Instagram. Yet online reviews are now an essential piece of the social media ecosystem and have a longer lasting impact on a business, than a retweet or a facebook like. They live on review sites ripe to be consumed by potential customers.

Last week I had the privilege of interviewing Spike Eskin, co-host of the humorous The Rights To Ricky Sanchez, a Philadelphia 76ers focused sports podcast.

Spike, along with his co-host Michael Levin, have stumbled upon a formula, through comedy, authenticity and community engagement that has turned their podcast into a positive review generating machine.

For those of you who have no interest in sports, I get it. While I personally have a passion for my Philadelphia Sports Teams, I understand people who don’t see the entertainment value of sports and look at them as a waste of time. But bare with me, put your skepticism aside, and take a moment to see what insights can be gleaned from this unicorn of a podcast.

The Rights To Ricky Sanchez – A Sports Podcast

In order to understand how online reviews of The Rights To Ricky Sanchez podcast became a home to a vivacious community of sports fans, we need to understand the history of show in the context of the sports world.

In 2013, the Philadelphia 76ers were going through a change in management. After years of running on the treadmill of mediocrity, fans of the team were craving a new approach to building a competitive team. Instead of taking a measured approach, the new General Manager, Sam Hinkie, decided to take a more radical and long term strategy, ridding the team of any valuable players in order to benefit from having one of the worst records in the league. By having an awful team, they’d have the chance to draft a few top of the line prospects out of college.

Sixers fans knew that the next few years would produce some ugly basketball, but the long term goals would make it worth it. While most casual fans’ interest in the team waned, a small contingent of fans who understood the long term view of Hinkie’s plan became fanatical, even cultish. Fans of the team began to live by the mantra:

Even the name of the show was the result of an inside joke among the Sixers community. Ricky Sanchez was an obscure Puerto Rican basketball player, who most likely would never actually play for the team.

The podcast initially had a small following. Listeners appreciated the comedic banter between Spike and Mike as they made mountains out of the minutia of Sixers basketball. The shows were irreverent, oscillating between obscure Sixers related news and pop culture phenomenons that interested Spike and Mike.

Check out their very first episode to get a sense of their podcast:

Over the next few years, the Sixers became a magnet for criticism and controversy, which emboldened the podcast to thrive on the absurdity of their fandom and self-deprecation. The vitriol spewed at the Sixers management decisions, cursing them for purposely fielding an untalented team, catalyzed the cultish fan base.

As the national derision for the team spilled onto the fan base, the solidarity of the audience united the podcasters with their audience.

In fact, Spike organized a yearly party for the cultish Sixers fans and his podcast audience to congregate and celebrate the losing season with a new top draft pick. Each year the party grew along with the niche following.

How big did this event get?

Check out the video from this year’s party:

I had the opportunity to interview Spike and find out how he thought the online reviews were impacting the podcast.

Why do you think you started receiving humorous reviews on iTunes as opposed to serious reviews? Was it something that you or Mike did?

I’m not sure. When we started reading them, I think they got funnier. But even to start, they were pretty funny. I think our listeners and the community as a whole are very aware of all of the inside jokes we all have. But I’m not sure this was due to anything we did specifically.

How important do you think reviews are to the growth of the podcast? Has it led to more advertising?

First, I just thought it’d be amusing. But also, one thing you learn in radio is that one way to get more calls is to put more calls on the air. Calls beget more calls. I guess I just figured that reading reviews would inspire more reviews.

What inspired you to start reading your reviews on the podcast and how did this tactic impact the amount of reviews that you received?

We don’t accept traditional advertising, so I’m not sure. We have one sponsor, who donates to two of our favorite charities every month as payment. We’ve had no shortage of people who ask to advertise, but as of yet we haven’t done that. I don’t have any data that says that reviews are important. I just know I use amazon reviews to judge whether I’ll buy a new product on Amazon, and I use Yelp reviews before I go to any restaurant.

What advice would you give to other podcasters to increase the positive reviews on their shows?

What’s your all time favorite review that you’ve received, and why is it your favorite?

The first one after we named it The Rights To Ricky Sanchez in 2013. “My new favorite podcast, thank you guys.” We were his new favorite podcast and we had only done two episodes. I hope he still listens. Other than that, every other one is my favorite.

What inspired you to add your podcast to Stitcher and Soundcloud, and has that added any value to the podcast?


I think one of the reasons people like our podcast is because we’re generally accessible and interact with people. This is a chance, like when we do Twitter questions, for them to be a part of the podcast.

Why do you think your listeners enjoy writing reviews for the podcast?

People kept asking for it. I genuinely don’t understand why people like Stitcher over any standard podcast app (I use BeyondPod), but they do. It was only 20 minutes worth of work and it made some people happy. Our traffic has increased on it every month, so that’s good.

Bonus: When do you think the Sixers will win their first title?

A Look Into the Funny Reviews

While the early online reviews of the show were humorous, it wasn’t until Spike began reading the best online reviews on the podcast that this type of engagement took on a personality of its own.

As recently as 6 months ago, Spike began each show letting their audience know where the podcasts could be found, then he would read a sampling of the funniest recent reviews. Listeners appreciated the acknowledgement of their comedic reviews, and the segment began to inspire over the top attempts at getting the reviews read on the show.

A few curious things began to happen with the types of reviews The Rights to Ricky Sanchez received on iTunes.

When we dive into the actual reviews that The Rights to Ricky Sanchez has received, we notice three unique types of reviews that they receive.

With inside jokes, like the way Spike’s dog sometimes interrupts the podcast, fans of the show have flexed their creativity. Incentivized to produce entertaining online reviews that the rest of the audience appreciates, listeners get the opportunity to be a part of the show.

As Spike mentioned in his interview:

It’s rare to see an audience base that loves you so much that they are comfortable sharing their critiques WITHOUT it affecting how they rate the show.

The listeners love it, but without hesitation, submit suggestions to improve the show even more.

Fans of Other Teams Love the Podcast

When the fans of your competitors can’t hide their appreciation for your product.

So what can a business learn from the reviews earned by the Rights To Ricky Sanchez podcast?

Reviews here are really the forum for an ongoing conversation between the hosts and their audience, so naturally the inside jokes and listener stories are part of the content of that conversation, as are the Sixers themselves and the topics covered in the podcast.

The point is: The conversation is bigger and broader than a series of “grades” given to the podcast.

This simple insight could spark ideas for any business:

Could restaurant reviews be a forum for a conversation about food or service, something both restaurant owners and patrons care about?

Could doctor reviews be a forum for a conversations about healthcare, something both providers and patients care about?

By reading reviews on-air, the hosts are not only rewarding reviewers for participating, they’re bringing it all full-circle: emphasizing the conversation over the one-way broadcast, stoking a sense of community and shared interest that drives participation. 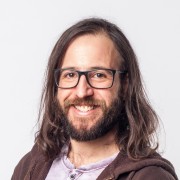 Garrett is the Head of Marketing at Grade.us, an online review management and marketing platform. When he's not crafting content, he's scouting the perfect ice coffee, devouring the newest graphic novels, and concocting a new recipe in the kitchen.

How To Get ‘Review Us’ Stickers and Posters For Your Business

How Guests Use Hotel Reviews To Choose Where They Stay